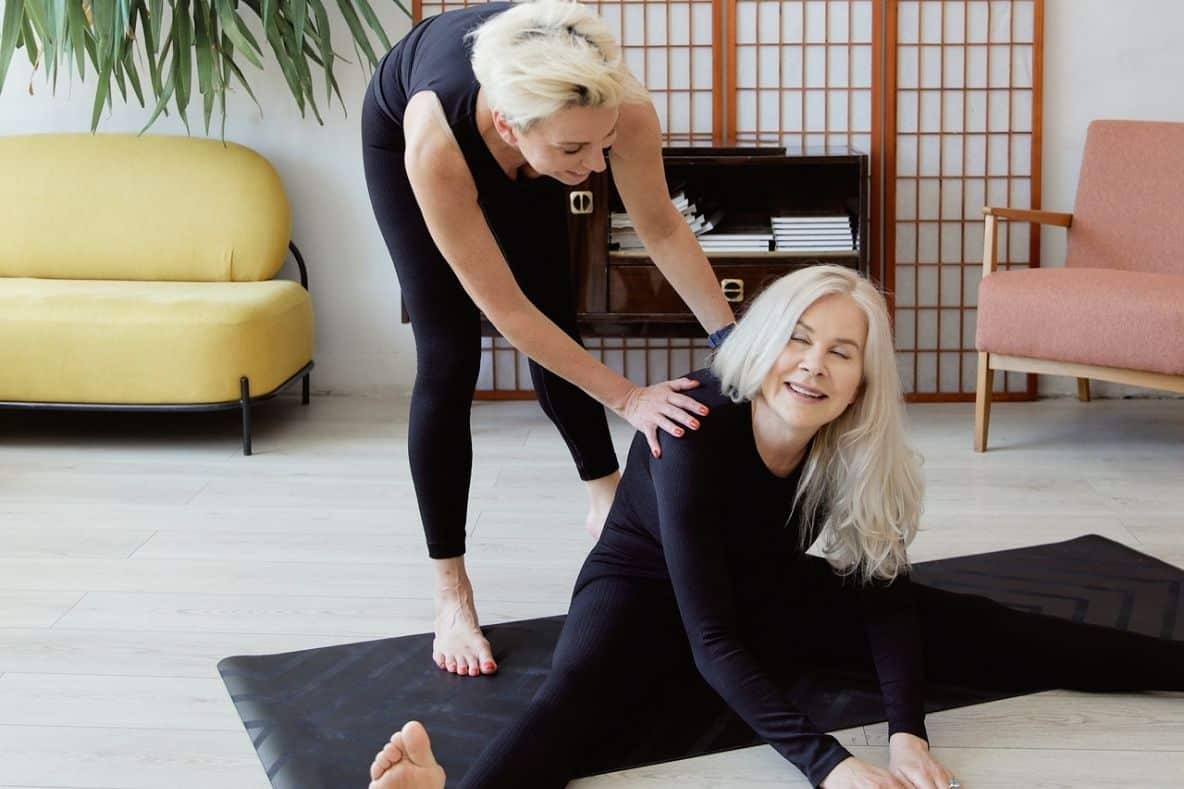 At 7 Chakras, we offer guided meditation for kundalini awakening through a calm and peaceful kundalini activation process. This calm and peaceful process is not as aggressive a process as KAP and Breath of Fire (Kapalabhati) normally use. Moreover no spiritual transmission (Shaktipat) by a Guru or teacher is ever required. It makes one one’s own master with one’s own insightful control over the kundalini activation process. Hence it’s much easier and consequently way more sustainable in the way that you can make it your first nature. As a result it keeps working as a way of life without needing any further sessions to do so, lifelong. You perennially keep experiencing the spurts of rising energy from your gut to your brain with every single breath. The spurts of rising energy flow via spine between the root and the crown chakras rejuvenating you every single time. 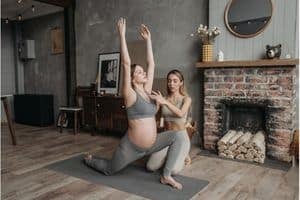 Guided meditation for kundalini awakening does a simple extension in the normal breathing pattern once all chakras are open. Breathing becomes the perception of energy with every single exhalation when chakras are open, removing all obstacles in its way. The way from the coccyx at the pelvis to the crown at the top of the head has no obstruction along it any more.

Kundalini aka life energy personalized as insightful intelligence working through the nervous system rises from the gut to the brain. It does so through the spinal cord provided all the chakras are open. It rises every single time the breath gets almost fully exhaled in an absolutely quiet manner. There is no force that needs to be exerted at all while exhaling. This way, it keeps the flow of kundalini aka insightful intelligence intact incessantly with the passage of time, every time.

The experience of kundalini awakening evokes different reactions in different individuals when it happens for the very first time. First time it rises through a person’s spine via vagus or Sushumna, it may (or may not) show some tantrums. They are there in forms of different reactions to its first experience depending on the person’s psychological and neurological disposition. Some feel the very first rise as an electrifying shock arising from the left over impediments in its way. Some others feel it as a sense of an extreme joy never experienced before. There is a full spectrum of reactions as varied as persons are! 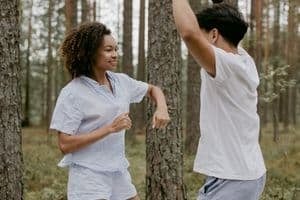 Once the initial honeymoon (or nightmare) is over, it settles down as a conscious creative potential in the coccyx again. One cannot take it for granted to work automatically, letting one fall back in their mechanical ways of life again. Getting energy of intelligence transferred to brain with every single breath still keeps lying in the conscious domain of awareness. One needs to keep one’s chakras open as one’s first nature for kundalini awakening to keep working incessantly. Once it’s successfully done, one needs to turn conscious of one’s breathing with every single breath whatever one is doing.

Won’t this kundalini activation process turn our attention divided as and when we need to focus on something of importance?

Guided meditation for kundalini awakening rather keeps it focussed in the very moment all through the span of its time. In fact, it stops us from drifting into mind’s domain with its emotional emphasis on past memories and future imaginations. It keeps us centrally fixated in the process of thinking rather than getting swayed by thoughts unconsciously disturbing our attention. 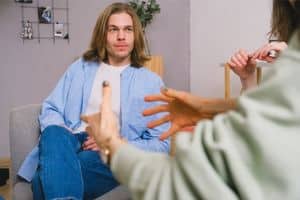 For this to take place in a seamless way, we don’t need to count our breaths like people counting beads. That will make kundalini activation process as mechanical as any other meaningless stuff people use to increase concentration. Concentration and attention aka focus are two different things altogether!

Here is something real beautiful to go along the guided meditation for kundalini awakening. Once the insight of energy has awakened as a potential, every single extended exhalation of breath does a miracle. It fills the head as well as the pelvic region with an extreme sense of joy and passion. This joy always remains as fresh, passionate and spontaneous as it was when we felt it the very first time.

It quite likely might be there due to an increased release of serotonin, dopamine, oxytocin and endorphins in nervous system.

Imagine having a passionate joy of cosmic orgasm at the crown chakra and a sexual orgasm at the pelvis simultaneously with every single exhalation of breath forever!

What else do we want on earth? It’s like finding a goldmine (if gold is really as important as this) for lifelong!

What actually happens is that kundalini activation process trains us for ‘lightness’ as a personality style to adopt. And it does so while equipping us with its traits, namely, interest, insight and adventure. Not even the acutest stress can pull us off the track any more. It’s like utilizing the ‘smart vagus’ of Steven Porges’ polyvagal theory. That’s what strengthens us in the face of an otherwise sympathetic nervous system response of ‘fight or flight’. 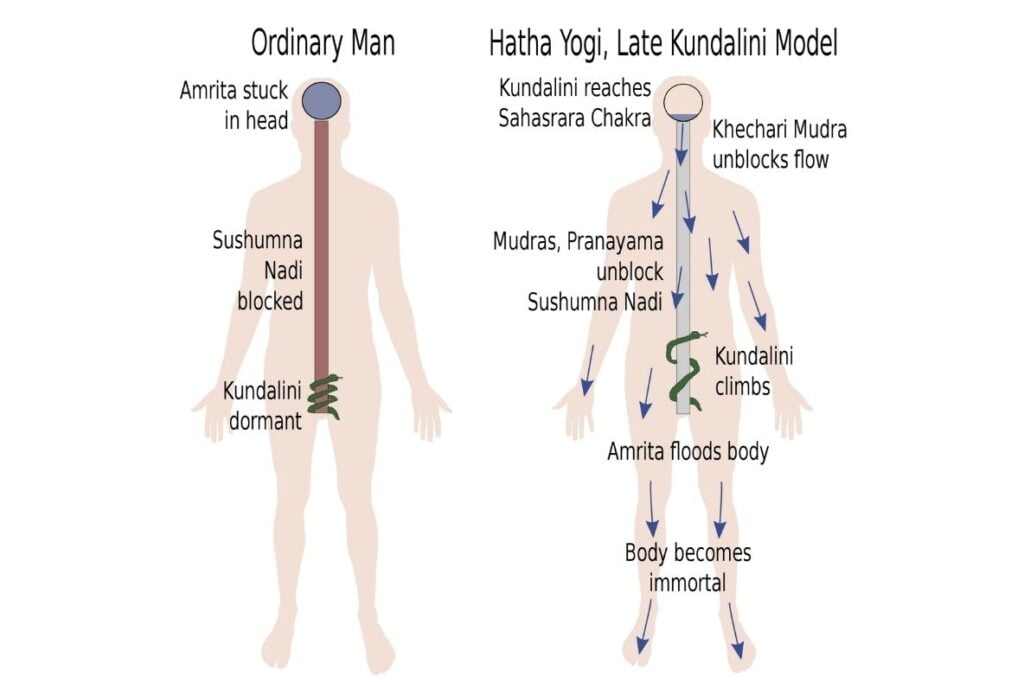 In fact, we have done something even much bigger than this. We have emptied our mind along. And in doing so, we have become invincible.

As we empty our mind, we fill up our brain with invincible energy flowing uninterrupted through spine up to crown. And we keep renewing the entire kundalini activation process with every single breath! Guided meditation for kundalini awakening enables us not to fear even the most imminent threat of death. We have discovered the most artistic way to live life, live it here, live it now. And we have learnt how to do it, here and now.

Consciously extending exhalations a little longer than inhalation after opening all the seven chakras does it all. And kundalini activation process does it well too. It’s simple. It’s no rocket science.

As keeping chakras open along with extending exhalation a little longer than inhalation becomes our first nature, the miracle happens. It means we no more need to keep an account of both in a list of ‘things to do’. We just keep getting its perceptual effect through keeping sensing a non-stop passionate joy without any break in it. If we ever perceive a chronological break, we immediately need to set it right, then and there. 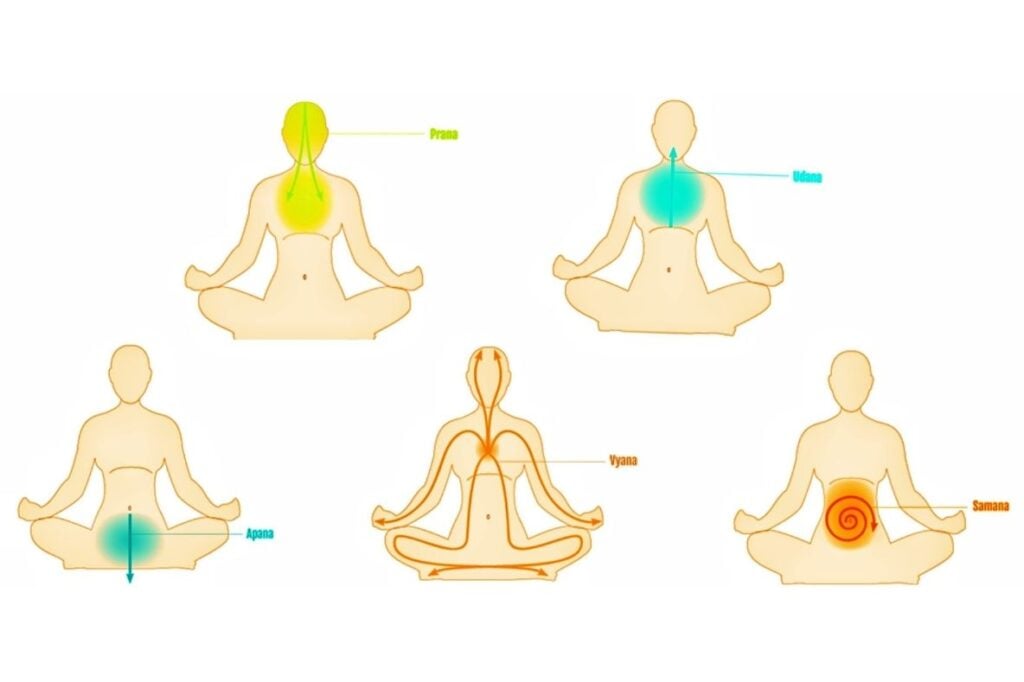 Breathing isn’t just a simple exchange of gases within the lungs. It’s way more than that. That’s why in the ancient chakra scriptures, it has been named as ‘Prana’ meaning the basic core of life energy. It’s conceived of having five types of winds in the human system…

There is also a mention of ‘Nadis’ meaning channels in body including nerves, arteries, veins, capillaries, bronchioles, and lymph canals. The main three among them are…

The Science of Breathing

Breathing is a biological process of moving air in and out of the lungs to replace carbon dioxide with oxygen. The exchange takes place in alveoli through diffusion, the gases being transported to and fro the cells by circulatory system. This makes cellular respiration possible where cells extract energy from digested food through its oxidation. Carbon dioxide is generated as a waste product to be expelled out of the body through external respiration called breathing.

Breathing also controls speaking, laughing, creating facial expressions and reflexes like yawning, coughing and sneezing. The respiratory tract has parts to it…

One must take care to opt for diaphragmatic breathing alone.

During exhalation, the lungs empty themselves to the functional residual capacity of air which occupies a volume of 2.5 – 3.0 liters. An extended exhalation can reduce it further to 1.0 liter, not more than that.

One may exhale as much extra between 2.5 – 3.0 liters leftover and 1.0 liter leftover as one feels comfortable with. 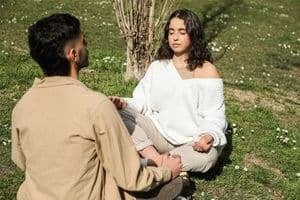 How can breathing empty the mind while mastering kundalini activation process?

Emptying the mind means getting rid of all its beliefs, habits, fears and desires. If we try to do it through a conscious mental effort using our will power, we miserably fail. In fact, we are bound to fail this way since we are trying to kill mind by mind itself. Why would mind ever commit suicide? It’s happy being in control of not only our psychology but also our biology. It does so by turning our perceptions and urges mechanical  as per its habitually decided blueprint.

It’s only possible to empty the mind when it’s posed with an impending emergency that it has no solution for. It stops working in such an impending scenario. Consequently it gets forced to surrender its reign over the action needed to be taken to get rid of it. The brain takes the charge and does the appropriate action to come out of the situation.

But the habits die hard. The entire pattern comes back to the same square one once the emergency gets over.

Hence though imminent emergencies can empty our mind in a flash of a second, they aren’t a permanent modus operandi. But yes, they can give us an instant glimpse of what an empty mind feels and works like. They can certainly demonstrate the superiority of any action done on our part without any doubt about it.

But then, how can we permanently empty the mind?

Whatever it might be, but it does  fill the crown of head with inexplicable joy with every single extended exhalation. Along with joy, the guided meditation for kundalini awakening also embellishes the brain with newer energy and newer insights. And every surge of this inexplicable joy keeps the mind emptied for its duration, in fact a little longer. Before it starts waning, the next surge appears with the next extended exhalation, reinforcing the mind’s emptiness again.

In case we ever miss the sequence, the sky isn’t going to fall loose on earth. We can again pick the thread of breath from wherever it right now is and restart the sequence once again.

It’s this that kundalini activation process of the guided meditation for kundalini awakening incredibly achieves for us at 7 Chakras!