Belly fat leading to obesity, lower back pain, and breathing problems including asthma symptoms are the lifestyle solar plexus diseases that a closed solar plexus chakra aka Manipura chakra is responsible for. 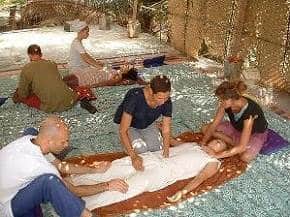 Same is true of the breathing problems including asthma symptoms.

But, of course, in the case of lower back pain, the results are not so straight forward. It rather takes a circuitous path to its cure.

First the maneuver tends to strengthen the muscles of the lower back. It’s because they acquire a state of perennial contraction for all the 24 hours. This keeps the solar thoracic diaphragm up and back.

It’s not easy for them in the beginning. Just after an hour or so, they start ‘screaming’, desperately wanting to go back to their habitual state of stretch. After all we have kept them like this for so long during all these years to date!

If we don’t give in to their screaming, they start paining. Of course this pain is not the same as the debilitating backache is; it’s rather the opposite of it that it has come to cure.

But still the pain is pain, which you have to tolerate for a short duration of a few days. It’s before the muscles gain enough strength to keep them contracted in this natural disposition of theirs.

Once it is done, it gets done for once and for all!

The maneuver opens up enough room for lungs to expand as they inhale air from the atmosphere; and the more air they inhale, the more they tend to exhale as well; the two parts being the two ends of the pendulum that the process of respiration is.

What remains to cure is the tendency of the trachea to narrow itself as asthmatic attack approaches. That is further taken care by the throat chakra as and when it opens.

As the area above the belly button loosens protruding it to the front, the area below automatically squeezes. It exerts a constant pressure on the fat there to gradually burn up. As a result it melts down along with toning the muscles in that area tight.

It’s basically continuous toning of the muscles that burns the fat over there.

In fact all the chronic illnesses in the body stem from the shortcomings in the physiology of the organs concerned. This in turn stems from faulty anatomy of the muscles in the areas concerned. That is because it continuously keeps exerting wrong kinds of pressures on the organs in the said systems.

Do you need asking anything regarding solar plexus diseases? It may be concerning belly fat leading to obesity, lower back pain, and breathing problems including asthma symptoms. All these are caused by a closed solar plexus chakra aka Manipura?